I can’t believe I’m actually here! It’s been a week, and I feel like I’m smiling like an idiot everywhere I go! Palm trees, water fountains, that big beautiful sky, the wonderful weather, and Disney stuff all over the place… this has been the dream for the past four years and now it’s reality!

But reality also includes things like traffic, car problems, house hunting, and noisy hotel neighbors. Does it negate all the good things? Not even close! But I guess it’s good not have your Mickey-tinted glasses blinding you too much when you move here.

Here’s how my first week finally living in Orlando has gone.

I left Tennessee last Tuesday, intending to drive all the way here. However, my car had other plans. My car had come down with some major issues about ten weeks before the move. Things were so busy during that time, that I just parked it in our driveway while we continued preparing the house for sale, and my son and I got around using his car. With closing imminent, I had to get it off the property so finally made the time to take it to a garage. As always seems to happen, repairs ended up costing three times more than expected. But it had to be done. So with a little less money in my pocket, but with the peace of mind of having a car that had just been checked out by a mechanic for the trip, I made my way towards Orlando.

Excitement was building as I neared the Florida border! But about fifteen miles away, I heard a weird sound coming from under my hood. I pulled off at an exit and made my way to a gas station. Nothing looked off under the hood. Looking under the car to see if there was anything obviously wrong, I noticed a car part laying on the ground. It was warm to the touch so I knew it had probably just fallen off my car! I’m not really a “car guy”, so I searched on Google to see if I could identify the part. There were a few options that looked similar. Then I decided to look on the receipt for my car repair of the previous week to see if any of these potential search hits might be something they had worked on. Sure enough, one of them was a match. It was a belt tensioner. It had a hole in the middle that looked like it might have had a bolt through it. Surely the mechanic had tightened it enough?

I did another search for nearby mechanics, and there was a local shop with good reviews at that same exit. They confirmed that it looked like a nut had indeed just worked its way loose! Thankfully, they noticed the bolt was still under the hood. But they were just about to close and still had other people waiting, so would have to find a matching nut the next day then reattach the belt. Luckily there was a hotel just a few blocks walk away, so I spent the night in Georgia alone, rather that in Orlando with my wife who I had barely seen in seven months. Disappointing? Yes. But it was just a temporary delay. Early the next morning I got the call that the car was ready. The cost was surprisingly minimal and I was soon back on the road. (Thanks so much to Wisenbaker’s Garage for being fair and honest and not taking advantage of a waylaid traveler with no options!)

When I left Tennessee, we had just been hit by a cold front and the temperature was 31°. Driving into Orlando it was 80°! And that’s been the weather all week. It’s so very nice! Now, I am well aware that I am moving here in late October when the humidity is not off the charts, the temperatures are not as high, and it doesn’t rain every afternoon. But for now, it’s been an absolutely wonderful welcome to Florida!

Since I had been delayed, I was arriving during the day while my wife was at work. So I made a stop at a store to prepare for something I hadn’t done in way too long… cooking a real meal! After scrubbing the stove at our Tennessee home to like new condition back in mid-August to help hook a buyer, my son and I had either eaten out, made microwavable dinners, or had sandwiches for two full months. When my wife arrived back at the hotel, we had our first meal together since July: grilled chicken, baked potatoes, and steamed broccoli. Maybe it was due to the long wait, but it seemed like one of the best dinners I’ve ever had.

The next day it was time to get down to the business of looking for our new home. For the first three years of this website’s existence, we’ve looked at houses all over the areas surrounding the parks. But now that my wife actually has a job here, we need to be a little more limiting in our search. She works in Hunter’s Creek, which is about seven miles east of Disney World. The ideal house would give us easy access to both without taking too long to reach either — but the priority is keeping her commute manageable. So areas that were top contenders in the past, like Davenport or the new construction around 429 are probably too far unless we find something perfect. In fact, after originally saying that we wanted to stay west of I-4, it’s now looking like we’ll need to find something east of it for her job.

My wife took off work and we met with our new real estate agent. She showed us three houses that day, and another four two days later.

A perfect house would be in the lower end of our budget, have a pool with a lanai, between Disney and work, in a nice neighborhood, with four bedrooms, not too close to neighbors, and move in ready. But that probably only exists in Fantasyland! Practically speaking, we’re looking for a house with a good balance of those top features: price, pool, location, space, and condition. For example, a less expensive house would be OK if it were a little farther away. Or a house with a pool would be OK if it needed a little work and only had three bedrooms. Compromises on one feature would hopefully be offset with benefits in another.

Our first two days of searching included homes that were all at the very top end of our budget. For any of those to have worked for us they would have needed to hit most of our other wants. And none really did. Location-wise, houses we saw in the red and green circles on the above map were OK. The green area was close to work, and while not close to the parks, they were right off two toll roads that go straight to Disney property. The houses in those two circles were a mixed bag. Some bigger, some smaller. Most a bit too close to neighbors. But all in pretty nice looking neighborhoods. The house in the purple area was too far away, not in the best shape, and kinda small. In other words, for the very top of our budget, none had the right balance of features.

In order to help differentiate houses as we look at them, we gave each one a name based on some memorable aspect. On those two days a few we saw included “The Nut House” (for the yard filled with fallen acorns), “The Cat House” (for the loud meowing from a cat in a carrier), “The Green House” (for the gaudy green carpet and countertops), and “The Stinky House” (self explanatory!). 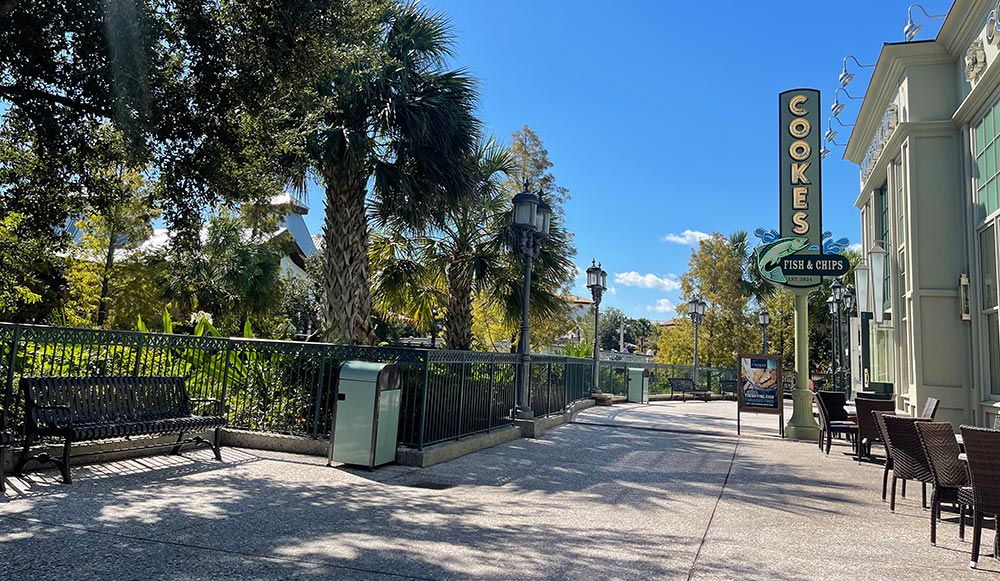 As my wife headed back to work on Monday, I started my first full week living in Orlando as a local… by acting like a tourist! During my mornings and afternoons this week (outside being a responsible husband and doing some required errands!) I’ve visited Disney Springs just to have a solo lunch, walk, and sit on a bench reading, had breakfast at the big two story McDonalds, gone to an indoor mall and an outdoor outlet shopping center, visited downtown Celebration, and perused some of those unofficial gift shops with the over-the-top building facades! I know, eventually stuff like this will become my norm, but until then, I’m enjoying it all being new to me.

At nights, the wife and I head to the internet to look for any new listings that match our criteria on Zillow, Trulia, and other real estate sites to send to our realtor. Yesterday, I got to tour a few of them in an area that feels tailor-made for our location preferences. 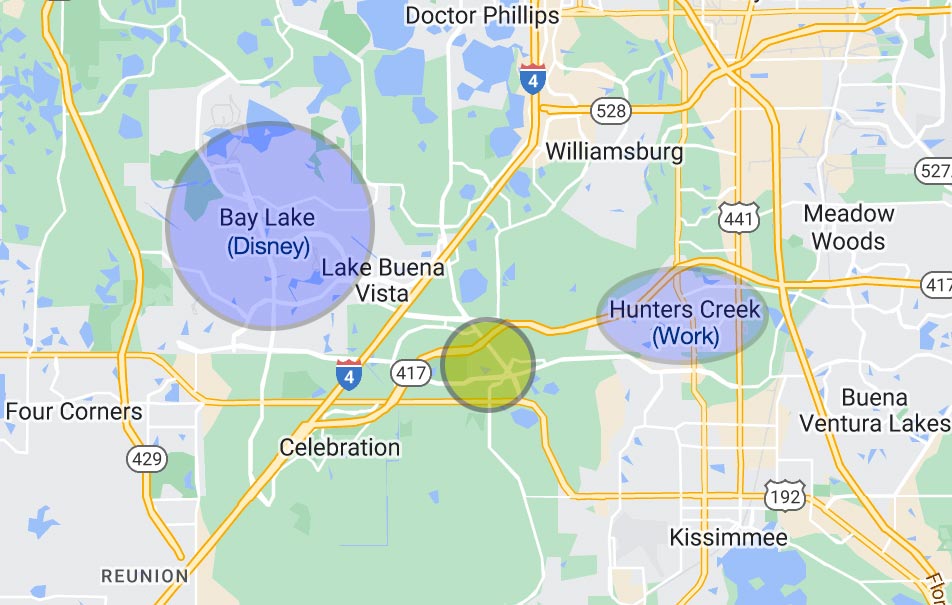 The yellow circle in the map above is almost equidistant between Disney and my wife’s work, and is bounded by several major roads to get you just about anywhere else. One of the neighborhoods here also meets one of our desires of not having the houses being right on top of each other. The prices are also within our budget. The downsides are the houses are a little smaller and not many of them have pools. We’re only a week into our search, so I don’t think we’re ready to compromise by giving up on a pool/lanai in exchange for location. But this might be an area to keep in eye on for future homes with pools coming on the market.

This post is already getting long, so I’ll add more about what’s it’s been like finally being here for my next installment, which will also hopefully include updates on a lot more house hunting.

Wow. I still can’t believe I’m here. And I’m still smiling while thinking back on this first week… and looking forward to what’s to come next week!

The title of this post is from the Brother Bear song “On My Way”. After using a lyric from a song about Tennessee for my “departure” post last week, I wanted to find a Disney song lyric for this “arrival” post after writing it. And, man, did Phil Collins give me a lot of options I could have went with from this song!
Tell everybody, I’m on my way
New friends and new places to see

With blue skies ahead, yes
I’m on my way
And there’s nowhere else that I’d rather be

Tell everybody, I’m on my way
And I’m loving every step I take

With the sun beating down, yes
I’m on my way
And I can’t keep this smile off my face