The countdown to our move date has now reached 500 days! I remember it hitting 1,000, and the move seemed so far away then. But now that we’ve halved that number, the move seems so terrifyingly close! I will readily admit that I’m starting to freak out a little bit.

I think being all but quarantined due to COVID for most of 2020 made the year fly by. It just seems impossible that it’s been almost a year since last March when the lockdown began. In addition to the year disappearing, COVID also made us reluctant to do house projects that would require us to allow workers into our house. This milestone has really driven home just how much we still have to do and how little time we seem to have. Thus the panic setting in!

So to celebrate 500 days (and fight off the rising fear!) let’s talk about some of the more positive Disney goings-on in our lives recently!

This past November we took a mini-trip to Florida after the long months of cabin fever and the late-fall chill finally got the better of us. We took precautions! We drove straight there in a single day, only stopping for the minute or two it took to pump gas. Rather than a hotel, we rented a house. Then we literally didn’t leave for the entire time we were there: no restaurants, no beaches, no parks, no shopping, no anything! Sat by the pool, read two books, watched football, and ate too much! Sunny and 85 degrees the whole time!

One of the nice things about the trip was it gave us a chance to start looking at exactly what we need to think about when it’s time to buy a house. The rental we chose was very similar to what we think we want. And looking at what we liked and disliked about that house gave us a head start — so we literally started taking notes! Here are a few of them.

To paraphrase that classic book opening, 2020 was the best of times and the worst of times for us when it came to our attempts to use running to stay fit. The year started out great with our first in-park runDisney event in January. Then two things happened that threw a wrench into our workout regimen.

The first was my wife’s medical issue flaring up and making it very difficult for her to run for very long. She did so well for all of 2019 and was able to run an entire 5K at Epcot in January 2020. But in the following months she had trouble even walking for a couple of miles. She still goes out for the occasional walk with me, and she’s trying to keep fit with other exercises. But barring some medication helping her condition more than the current one, I’m not sure she’ll be running anymore. I’m so glad she was able to do the Disney Marathon Weekend when she did.

The second issue was COVID. For the first several months starting back in March when there were still so many unknowns, going outside was discouraged and I stopped running completely. In the summer when going outside for nonessential activities was said to be safe, I tried to get back on track but felt like I was starting over. By early fall with the kids stuck at home for school, I was struggling to force myself to make the time.

When Disney announced that the 2021 Marathon Weekend was going virtual, I decided to use that as motivation to get back to work. I didn’t do as well training as I did the previous year, but by the time race day came in early January of this year, I was able to complete a 10K for the first time since last Marathon Weekend. And because we had to cancel our January Disney cruise (where we had hoped to walk the 5K Disney holds on their private island) I also signed up to run the 5K Castaway Cay Challenge as a consolation. Completing both events after a year of feeling like a failure was a small victory I really needed. And it has motivated me over the past few weeks to get out and run more often. I just wish the weather would cooperate more! (I was headed out to run this morning but it’s snowing so bad they cancelled school!) 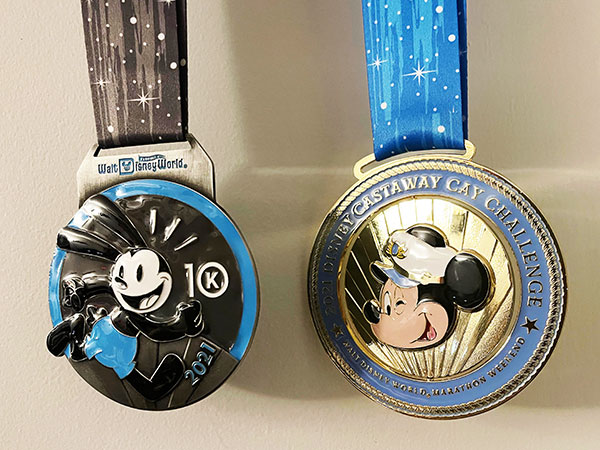 With the cancellation of our cruise (and our need to get down to Orlando to find a neighborhood to live in when we move), I decided to surprise the wife today with a trip to Disney World. Since it’s making up for our missed 25th anniversary trip, I wanted it to be something special. So I planned it for the week of October 1st! Many of you will recognize the significance of that date, but for those who don’t, it’s the 50th anniversary of the opening of Walt Disney World back on October 1, 1971. Here’s hoping vaccines will be plentiful and the disease less rampant by then.