Time keeps marching on and now we’re one year and three months away from our target date! I admit to having continuing panic over the planning that still needs to be done. But the excitement is finally building as well. When the move was four (or even just two!) years away it almost seemed so distant as to be unattainable, like thinking about retirement during your college years. Now, it really is starting to feel like we’re on the cusp of moving to Disney!

As we get closer, we’re starting to reconsider some options and ideas we originally passed on — when it comes to the wife’s job, the type of house we want, and the area we might want to live in.

Last week we were supposed to be in the Orlando area doing our first of what will be several neighborhood hunting trips this year. Unfortunately, in February my wife’s job threw a wrench in our plans. Long story short, there’s a possibility she may have to find a new job soon! It’s now been a month since they gave her that news and there is still no definitive info from them on when/if, so we decided it might be better to save that trip money in case we need it to live off between jobs. She does now have her Florida license, so we have been looking at her potentially moving down early and the rest of us joining her next year. But she’d want to find the perfect job in the area if she were going to do that, and so far it hasn’t come available yet!

So the house/neighborhood search continues, it’s just being done on the internet here in Tennessee. And something I find myself returning to occasionally are townhouses and condos. For the past three years, we’ve been steadfast in our assumption that we wanted a single-family home. And that is still the front-runner by far. But every so often I see a listing for some absolutely amazing property and am stunned to see it’s not a house.

A lot of our hesitancy over townhouses/condos has been due to what we want to do in our next home. Here are just two examples. I have a functional but fairly basic home theatre and am hoping to expand it when we move. A loud surround sound system isn’t going to fly when you share a wall with someone! And my wife is dreaming of that beautiful lanai-covered pool with a view. Are we out of luck if we were to go with a townhome?

While there would be compromises, there are options out there. We’ve actually seen a couple of amazing private pools outside of townhouses, though the view may not be as grand. And surround-sound capable headphones could alleviate the issue of being a noisy neighbor while still allowing me my 100+ inch screen.

In return we get more leeway in our options. Areas where we couldn’t afford a full house are now open to us. Or we could stay a bit further out but decrease the amount we’d be paying. Other benefits include potentially less maintenance and, in some places, resort style amenities.

In that same vein, we’ve also started looking at a few locations we had initially thought weren’t worth pursuing. In most of our original searches we’ve generally tried to focus our attention on a section of the map we like to call “the triangle”. For those familiar with the area, it’s north of where I-4 meets 27 and west of I-4 (the yellow section of the map below). But we’re starting finding some interesting places just east of the southern boundary in an area around Loughman (the green section of the map below). Prices are a bit lower and it still seems to be in our 30-minute-radius-to-Disney — though until we get a chance to get down there and drive it that’s just a best-case online theoretical number! A friend who used to live in Orlando also suggested Hunters Creek (the blue section of the map below), which is a little further away in the east, but has two toll roads bordering it that go straight to Disney property. A last area we’re taking a second look at is south of 192 where it meets Poinciana Boulevard (the red section of the map below). We once stayed at a resort in this area and thought the traffic was a bit too heavy for where we wanted to live. But with Osceloa Parkway close by and being closer than Hunters Creek, we’re thinking about a second visit.

Now, I know any locals reading this are probably looking at one or another of the places I’ve mentioned here with horror thinking, “That’s a terrible idea”! We know we don’t know a lot of things yet! That’s why we’re so eager to get down there and really see these places with our own eyes and actually get to drive the roads during traffic to get a feel for things in a way we just can’t online. We’re going to do our due diligence! But if you still have concerns or suggestions, feel free to write us at the email in the sidebar to let us hear your two cents! 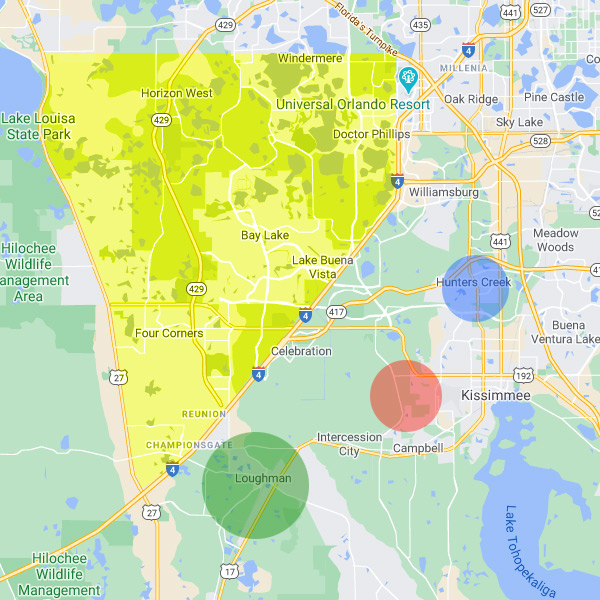