I had assumed that my first real post after moving into our home here in Orlando would be some kind of recap of our first few weeks. But everything still feels so new that I think I need some perspective before I can reflect on it properly. I can honestly say it has been wonderful! But I also feel unsettled and out of sorts not being in a daily routine yet. So instead, let’s look at some of the neighborhoods we considered during our house hunting process.

Before getting into the details, you should know what we were looking for in a house so you can see why we made the decisions we did. We had five main areas of concern.

– PRICE: This one needs no explanation! But our range did have a good amount a wiggle room depending on what we were willing to do. The perfect price would be one that kept our monthly mortgage payment close to what we were paying in Tennessee. This would allow us to make minimal changes to our lifestyle budget-wise. (Prior to the housing market blowing up in 2020, this looked like it was going to be simple! Not so much in 2022.) We could move up to several hundred dollars more per month, and in exchange just be a bit more thrifty than we were used to. The wildcard in our range was me. I’ve been a stay at home parent for 20 years. And we planned this move around our youngest child graduating high school. Which means I’m technically retired now! I’d been considering what I might do once they left the nest. And here was a possible answer. We could raise our house budget a good amount if I were to take on at least a part time job. That gave us a lot of flexibility.

– SPACE: This one encompasses three different things. First, while my wife is up for downsizing, I’d prefer a house with space inside to do with what we want. Second, we’d like to not be on top of our neighbors. We don’t need an acre of space between us. But just enough room to where we don’t feel like we’re in a de facto apartment. Lastly, we need room to park. I didn’t know this was something we needed to look for until after we started looking! But we have two cars. My son will have one when he joins us. And if my daughter decides to move to Florida and needs to live with us until she gets her own place that’ll be four. Plus we hope to have friends and family visiting and don’t want to have to worry about where to park them.

– OUTSIDE: I don’t swim, and even I want a pool with a lanai! We want to feel like we’re on vacation everyday and there’s no better way then sitting out in the sunshine under a lanai next to a sparkling pool. And since we have a dog, we also need a bit of yard, preferably fenced.

– CONDITION: I just spent several months preparing a house for sale. I don’t want to paint, scrub, fix, or pay to have fixed anything if I don’t have to!

Here’s my first nugget of wisdom to impart to those who might read this in the future when considering a move: you are almost certainly not going to get everything you want, so temper your expectations. Each of our wants was more like a spectrum, each connected to the other. If we found a lower priced home, it might not be in the best location for us. If we found a house with a pool, it might be too close to the neighbors. So the goal was to try to find something where all our conditions were balanced in a way we could be happy with.

With that explained. Let’s look at one neighborhood we considered.

(In previous posts where I discussed potential locations we might want to move to, I cautioned that our observations may be way off since we were doing most of our research online. Despite the fact that we were actually house hunting in these neighborhoods in person, I’d still advise you to take our opinions for what they’re worth. Sure we got a chance to actually drive to and walk through these places, but our time was limited. While our thoughts are based on more actual data than before, they are anything but definitive!)

This first area I’ll discuss is a subdivision: Indian Wells. 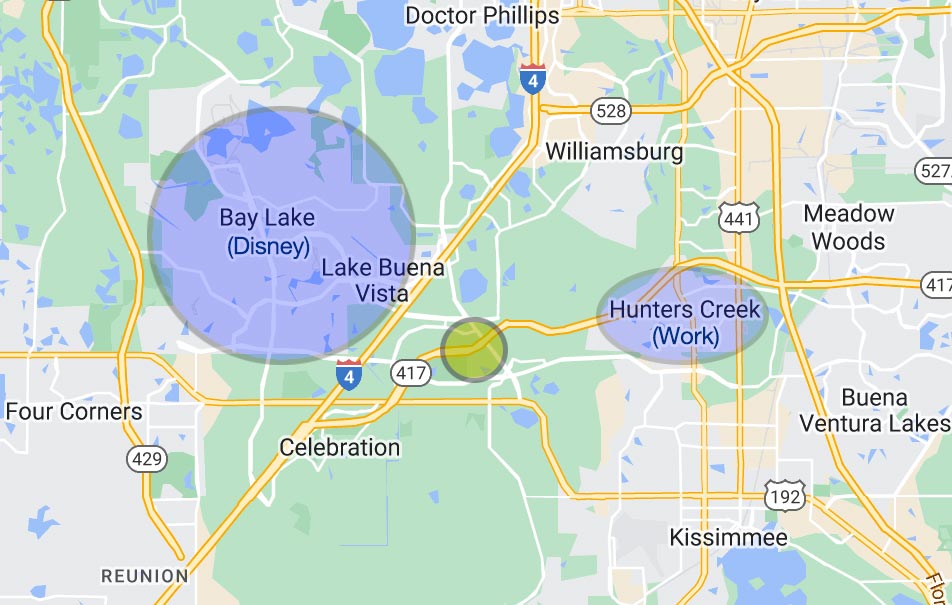 Indian Wells had several things going for it. It’s very close to the parks, and is near several major throughways. A toll road leads almost directly out of the neighborhood and to my wife’s work. Prices were pretty reasonable. And some of the houses weren’t on top of each other. (More on that in a moment.) The downsides were the houses themselves were a bit smaller than I would have liked. There weren’t many available with pools. And being close to all those major roads could mean traffic. Then there were the BIG issues.

The first, was something called “zero lot lines”. I had never heard the term before and was surprised to discover it was actually a thing allowed once I looked into it. Basically, instead of placing a house centered within its lot, some of the houses in this neighborhood were placed at the far left or right of their lot, usually right on the property line itself. One house we looked at here had a fenced in yard on its left… but instead of the fence having three sides (front, side, and back, with one side attached to the house) it had two sides (front and back) with the side of someone else’s house being the edge of your property! (Here’s a link with a good graphic. Scroll down to the green picture and imagine those black lines are fences.)

The second issue was the HOA rules about parking. We’d seen some subdivisions with narrow roads where everyone seems to park right at the curb. It looked bad and it felt dangerous. So I kind of get where HOA’s with parking restrictions are coming from. The problem for us here was most of the houses had very little available parking, and the HOA rules on additional parking seemed draconian.

“No parking on the curb.” Ok, reasonable if you have just a single car or two.

“Any guest who visits you must have a daily parking pass to park on the curb outside your house, filled out five business days in advance.” Umm, sure? Maybe? I guess?

“You are only allowed to ask for a permit five times per year.” Yeah, I think we’re going to look at houses elsewhere!

Seriously, Indian Wells seems like a lovely little area. But the rules just didn’t feel conducive to being social with people outside the subdivision. I’m sure it’s a great place to live for some people. But I don’t think it was right for us.

That’s it for today. I’ll continue posting these looks at various neighborhoods we considered over the next few weeks.