In my very first post I mentioned some of my inspirations for creating a site to document our plans to move to Disney. I also put those links in my sidebar so they’d be on every page of the site within easy reach of readers. But there is another link I put over there (at the very top!) that I hadn’t mentioned yet. That link leads to an inspiration, not just for this site, but for the entire idea of moving to Disney: WDW Radio. I wanted to wait to mention them until I could do an entire post about what is my favorite podcast of all time! After getting even more excited than usual about the topic of one their recent shows, what better time than now. 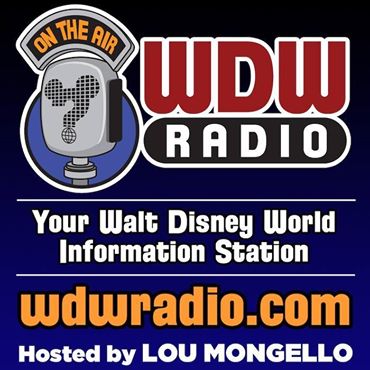 I starting listening to the Lou Mongello helmed podcast in the mid-to-late 2000s. We’d play our favorites on the drive down to Orlando to get us excited for what was coming! But my affection for the show was cemented after a major medical issue I had in 2010. I attended rehab for several months afterwards and listening to back episodes of WDW Radio helped get me through.

It was in following Mongello I discovered that the dream of moving to Disney was a reality for many people rather than just a nutty notion. He had actually done it! Quit his job, uprooted his family, and headed to Florida! Specifically because of Disney World! And he wasn’t crazy!

While he never shied away from the subject when it would come up organically, in over 500 episodes Mongello never had a show dedicated to moving to Disney — until now! Amazing timing for me that we get this topic a couple of months after I start our planning!

In a two-part, almost four hour show titled “Moving to Disney World” (great title!), Mongello and a group of friends discuss many of the things one might want to know before following their lead. If you’re in the same boat as me and are considering making the move, make some time to listen to this podcast. There’s no way I could comment on everything they discuss, and I’m not going to try! Instead, here’s his description of the episode:

“This week’s show is an episode that is literally 10 years in the making, as moving my family, my business, and my entire life to Walt Disney World was one of the most important decisions of my life. This week, I gather members of the WDW Radio Nation who are not only friends, but neighbors, as we share our experiences about moving our families to Walt Disney World. In the first part of our two-part conversation about Moving to Disney World, we will cover topics including making the decision to move, timing, logistics, sequence, location, buying vs. renting, neighborhoods, schools, kids, pets, cost of living, and even the weather. We share not only our personal experiences, but real-world, practical advice… just in case you’ve been thinking about making the move to Disney as well.

“In part 2 of our roundtable discussion about Moving to Disney World, I am joined by members of the WDW Radio Nation who are now also neighbors. We will continue our conversation, starting with employment, including finding or creating a job, and the timing of finding work vs. finding a place to live. We also address the very important topic of relationships, in terms of leaving friends and family, as well as finding new friends, and yes, new family as well. We’ll also talk about the actual realities of making the move, including what we would do differently, what we miss, lessons we leaned, and practical advice to share. Of course, we’ll also talk about how our Disney experience has changed, including advantages of living so close to the parks, and whether the Disney magic is still there. We’ll punctuate the entire discussion about our move to Disney with a quick Top Ten Reasons (other than Disney) to move to Disney.”

The entire four hour running time is full of helpful information. Though do be aware that while there are nine people in the discussion, they share similar backgrounds so some of their experiences may not apply to everyone. For example they’re all around 30-50 years old I’d guess so you won’t get much on moving to Disney for college or retirement. They almost all are originally from the northeast United States. So when they are shocked by how inexpensive housing and the cost of living are in Orlando compared to what they had previously, that probably won’t be applicable to those of us living in fly-over country where it’s the norm. (They also spent time talking about how friendly the people are compared to where they moved from. That’s just the south in general y’all!) Lastly, most of them moved to the same area of Orlando, so talk of other neighborhoods was a little limited.

Ignore that last paragraph though! This is an easy to recommend episode! There is so much useful information packed into this one that I’ll probably be going back to it again and again over the next few years to learn as much as possible from their experiences. While there are blogs and articles from people who have made the move, (as Lou might say) there is nothing like actually hearing from them and listening to the emotions in their voices as they talk about it.

If you’re a newbie to WDW Radio, it’s a must-subscribe podcast: be sure to listen to his other shows. The best thing about each episode is this isn’t just a job for Mongello; you can hear the love he has for Disney. And that love is something those of us considering the move — and those who have already done it — all obviously share!